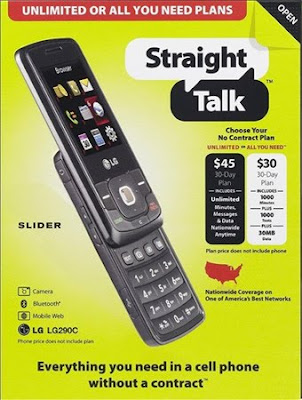 3 times I have used Amazon to get a decent cellphone - that they payed me to take! Those days are now over. A search on their website comes up mostly with phones that cost a penny - and much more. What happened?

Now rumors are abound about the shakeup in the industry. With the big battle just heating up BTWN Apples iPhone and Googles Android, the other carriers are (and need to be) pulling out all the stops. Hence my research begins for what is to come...

>> ClarkHoward
>> PCmag
>> Engadget
In another boon for cheap cellular service, we're beginning to hear word about something from T-Mobile called Project Black. This cryptically named market thrust will reportedly usher in much lower price points for unlimited service starting at $50/month. But for now, this is just a rumor until it goes public.
"Also, expect MetroPCS and myCricket to merge if Project Black is real."

Now the question is, does anyone know how/where to get a smartphone flashed to work on the ST(Straight Talk) network? Cuz I want a decent smart phone to use on their network.

Verizon is CDMA. No special sim cards, you just have to flash the PRL. The only other thing is, most CDMA providers require that your ESN (phone's serial number) be in their database and attached to your account. This would be the difficult part. Requires either someone on the inside, or a company-approved program (or clever social engineering).

Straight Talk is one of TracFone's newest brands and as of July 30, 2009 provides customers with two different value based 30-day rate plans. Straight Talk is an MVNO that uses Verizon's CDMA 1XRTT wireless network which was introduced in 2001 and is said to deliver between 40 and 60 kbs (kilobits per second) to customers[7]. Straight Talk's coverage is limited in certain areas (most of Kansas, Nebraska, Nevada, Mississippi and western Texas)[8] but provides good coverage in the major metro areas

WARNING: Buzzirk Mobile, Global Verge, Zero1 Mobile, are scams.
And beware - there are probably many more to come. Be smart, do the research.
>> Use Google Voice with your existing number
>> The quest for a truly open smartphone: can it be done?
>> Nokia N900
>> Maemo
>> OKI 900 (old school)
>> Free AT&T phones (w/new service/contract)

Thanks to my friend Paul Sibley [f] for getting me started on the research.
Posted by don_mecca at 4:51 PM